We've had lots of airplay for the debut album on over 100 stations nationwide, including a two month stay on the Relix/Jambands Top 30 Chart.

GET THE ALBUM NOW:

"intensely impactful...an explosive personal and sociopolitical narrative over six tracks that the rootsy emotional resonance feels like we just listened to 20." - Jonathan Widran

BIO
Greg Bucking is a guitarist, songwriter, vocalist, and producer who has been writing songs and performing live for decades. Over that time, he has released four albums with The Vine Brothers, two albums with Mother Freedom, and one album with Broken Carousel. In 2022, he released his self-titled solo debut, which spent two months on the Relix/Jambands Top 30 chart and received significant airplay on over 100 radio stations in the US.

Greg is a two-time finalist in the International Songwriting Competition (ISC) for his songs "Get Me to Arkansas" in 2018 and "East of Albuquerque" in 2016, and his songs have also been featured on The Discovery Channel and Apple TV+.

He penned most of the songs for The Vine Brothers' 2016 album No Candy, which was called "absolutely delicious" by No Depression magazine.

His song "A Little More Something" was called "the feel-good earworm of the summer" by Americana UK magazine.

In addition to songwriting and recording, Greg regularly performs as a sideman in a wide variety of musical groups including the world-renowned 3rd Wave New York ska legends The Scofflaws, where he has been the lead guitarist since 2009. Some notable venues he has performed at include the Troy Savings Bank Music Hall, Caffe Lena, BB King's, The Wetlands, The Van's Warped Tour, The Sag Harbor American Music Festival, The Supernova International Ska Festival, Third and Lindsley (Nashville), The Black Cat (DC), and Webster Hall (NYC). 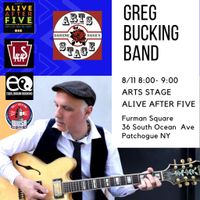 Full band celebration of the new CD! Outside at the Rockland Cider Works in Gilboa

Full band celebration of the new CD! Upstairs at The Main Room

solo set in the shed

solo set in the Cellar Tavern